The unit is headed by two insightful humans, Deepak Sarraf & Sandeep Kumar Sarraf, the former a Commerce graduate from Patna University and the latter, an Engineering graduate from Bihar University.

Durga Electricals is a multi-brand outlet that sells electrical goods of almost all the leading brands. In recent times, it has reached another milestone with inaugurating its PVC conduit unit, Sankatmochan Polyproducts at Hajipur Industrial area, Bihar.

Here they have strived to give world-class premium products manufactured with high tech machinery to make their trust stronger for the people who believe in them.

Being one of the most promising promoters, Durga strongly believes in the attributes of Quality Control and Quality Assurance, systematic production process, state of the art modern machines, clean, organized, and safe working conditions, and functioning completely as per government regulations. They are constantly innovating and adding new items to the product basket and manufacturing products that are being imported into Bihar from other states, carry out employee welfare programs, just to name a few.

Deepak & Sandeep, together with the next generation of the Sarraf family, Ujjwal and Neelesh have worked very hard in commissioning the new PVC conduit unit, Sankat Mochan Polyproducts.

This new venture will boost the market presence of the brand manifold.

28 years ago, in September 1993, a half-ounce manual injection moulding machine worth just Rs 1800 plus a mould worth Rs 400 (total capital investment of a meagre Rs 2200) was bought from a local dealer in Patna City. It was installed in a garage on a wooden stool in the backyard of their residence to manufacture colourful crystal caps of miniature decorative lamps that were formerly hung during Diwali and other celebrations.

This is when their Dream Industry started growing out its wings.
A few months later, the next step was taken, and it was introduction of the basic range of PVC Pipe fittings, most importantly, Electrical Junction Boxes. The struggle had begun. Competing with existing brands was a challenge, but then, it was always quality that put Durga at the forefront.

And this quality helped to propel the growth process exponentially. They introduced the Heavy-Duty range, a decision that involved risk. The product was heavy and costly. Initially, it was tough for the market to accept the expensive range.

Gradually, the products gained popularity owing to the complaint-free superior quality. More machines of higher capacity and moulds were added at regular intervals to complete the range. They moved from manual to basic semi-automatic machines, to fully automatic machines. The transition started delivering results.
Their efforts to upgrade production, both quantitatively and quality-wise, were just in time to cater to the soaring demand. It was time now to think and plan bigger. And, then they took a giant leap.

After almost 23 years of establishment, in 2016, they decided to move to the proper Industrial area, to a BIADA plot. The ambitious project involved huge investment, investment of several crores. They decided to surge and their positive attitude and unrelenting efforts delivered results.

With this, Durga made an incredible presence in the market by winning the hearts of millions of people. As they say, the journey to success begins with a small step and the team of Durga beautifully portrayed it with their hard work, determination and perseverance.

Looking forward to winning more hearts and bringing more smiles by giving the best ever products to the world.

Adding another feather to its cap, Durga has now became the first brand of Bihar to produce ISI Mark PVC Pipe Fittings (FIREX). Earlier, ISI Mark fittings were imported into Bihar from other states.

Our Badge of Honor 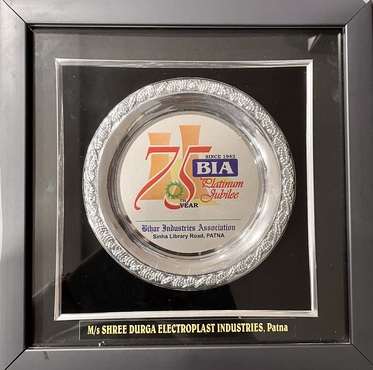 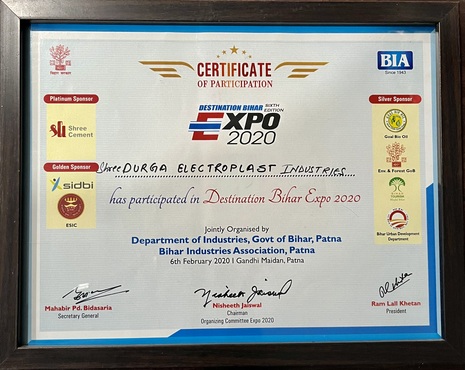 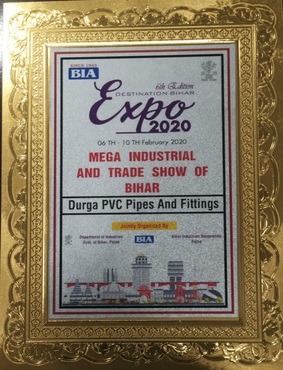 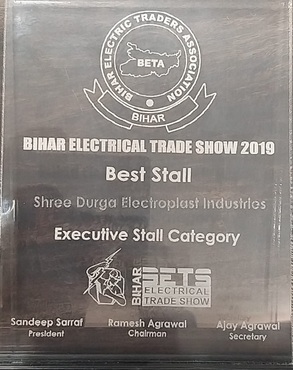 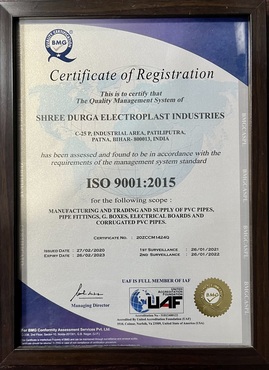 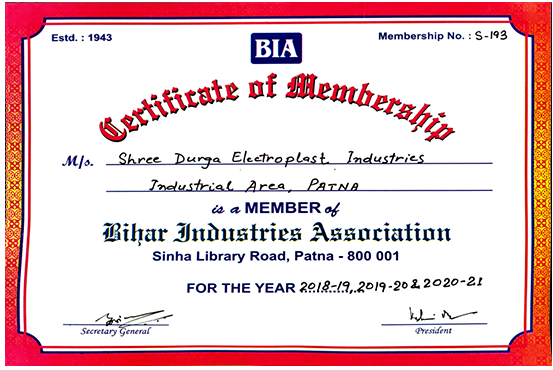